Bipolar disorder symptoms are characterized by an alternating pattern of emotional highs (mania) and lows (depression). The intensity of signs and symptoms can vary from mild to severe. There may even be periods when your life doesn’t seem affected at all. 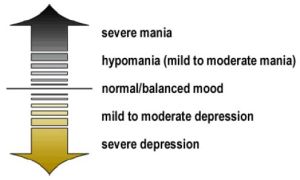 Severe episodes of either mania or depression may result in psychosis or a detachment from reality. Symptoms of psychosis may include hearing or seeing things that aren’t there (hallucinations) and false but strongly held beliefs (delusions).

Studying God's Word is my joy. I want you to understand that there is nothing greater than a life given to Him. I'm an ordained pastor who lives in Alaska. View all posts by Pastor Bryan Lowe

One thought on “Bipolar Basics, [Symptoms]”