“For as long as I can remember, I have wanted to be a godly person. Yet when I look at the yesterdays of my life, what I see, mostly, is a broken, irregular path littered with mistakes and failure. I have had temporary successes and isolated moments of closeness to God, but I long for the continuing presence of Jesus.

Most of the moments of my life seem hopelessly tangled in a web of obligations and distractions. I want to be a good person. I don’t want to fail. I want to learn from my mistakes, rid myself of distractions, and run into the arms of Jesus. Most of the time, however, I feel like I am running away from Jesus into the arms of my own clutteredness. I want desperately to know God better. I want to be consistent. Right now the only consistency in my life is my inconsistency. Who I want to be and who I am are not very close together. I am not doing well at the ‘living-a-consistent-life’ thing.

I don’t want to be St. John of the Cross or Billy Graham. I just want to be remembered as a person who loved God, who served others more than he served himself, who was trying to grow in maturity and stability. I want to have more victories than defeats, yet here I am, almost 60, and I fail on a regular basis.

If I were to die today, I would be nervous about what people would say at my funeral. I would be happy if they said things like “He was a nice guy” or “He was occasionally decent” or “Mike wasn’t as bad as a lot of people. ”Unfortunately, eulogies are delivered by people who know the deceased. I know what the consensus would be.“Mike was a mess.”

You might say Christianity has a tradition of messy spirituality. Messy prophets, messy kings, messy disciples, messy apostles. From God’s people getting in one mess after another in the Old Testament to most of the New Testament’s being written to straighten out messes in the church, the Bible presents a glorious story of a very messy faith. Sounds like you and I are in good company.

A few years ago, I was introduced to a group of uncouth Christians who call themselves “the Notorious Sinners.”  These are men from all walks of life who meet once a year to openly share their messy spirituality with each other. The title ‘Notorious Sinners’ refers to the scandalous category of forgiven sinners whose reputations and ongoing flaws didn’t seem to keep Jesus away.

In fact, Jesus had a habit of collecting disreputables; he called them disciples. He still does. I like people who openly admit their ‘notoriousness’—people who unabashedly confess they are hopelessly flawed and hopelessly forgiven. Graciously, these men invited me to be a part of their group. The ‘Notorious Sinners’ meet yearly at spiritual-retreat centers, where from the moment we arrive, we find ourselves in trouble with the centers’ leadership.

We don’t act like most contemplatives who come to spiritual-retreat centers— reserved, quiet, silently seeking the voice of God. We’re a different kind of contemplative— earthy, boisterous, noisy, and rowdy, tromping around our souls, seeking God, hanging out with a rambunctious Jesus who is looking for a good time in our hearts.

A number of us smoke cigars, about half are recovering alcoholics, and a couple of the men could embarrass a sailor with their language. Two of the ‘Notorious Sinners’ show up on their Harleys, complete with leather pants and leather jackets. I admit I run with a rough crowd—Christians whose discipleship is blatantly real and carelessly passionate, characterized by a brazen godliness. Unafraid to admit their flaws, unintimidated by Christians who deny their own messiness, these guys sometimes look like pagans and other times look like Jesus.

They are spiritual troublemakers, really, which is why they look like Jesus (who was always causing trouble himself ). They are full of mischief, laughter, and boisterous behavior, which is why they look like pagans. Truly messy disciples. The ‘Notorious Sinners’ are definitely a bizarre mix of the good, the bad, and the ugly, living a spirituality which defies simple definitions.

Oh, and they are some of the most spiritual men I know.” 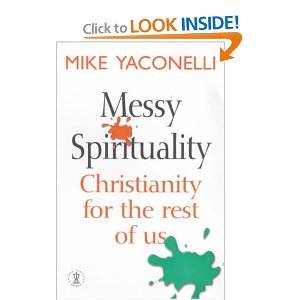 Messy Spirituality was written for the silent majority of us who have been convinced that we just don’t do Christianity right. We spend most of our lives worried about what we don’t do instead of what we have done, focused on our imperfections instead of God’s fondness for the imperfect. Why?

What if genuine faith begins with admitting we will never have our act completely together? Maybe messy disciples are exactly the kind of imperfect people Jesus came to earth for and whose company he actually enjoyed–and still enjoys.

If you want to find Jesus today, look for him in the midst of burned-out believers, moral misfits, religious incompetents . . . men and women whose lives are, well, messy.

Messy Spirituality is a strong antidote for the spiritual perfectionism in us all. Here are truths that can cut you loose from the tyranny of ought-to’s and open your eyes to the deep spirituality of being loved, shortcomings and all, by the God who meets you and transforms you in the midst of a messy and unpredictable life.

PDF File can be found at http://mikeyaconelli.com/yaconelli/words/SelectedYac.pdf