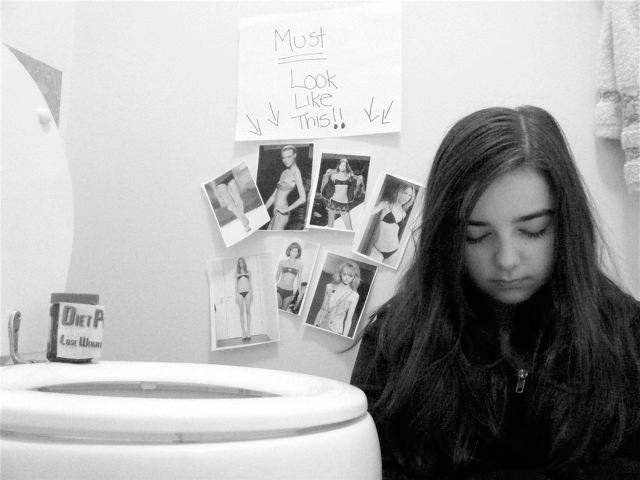 What Are Eating Disorders?

An eating disorder is marked by extremes. It is present when a person experiences severe disturbances in eating behavior, such as extreme reduction of food intake or extreme overeating, or feelings of extreme distress or concern about body weight or shape.

A person with an eating disorder may have started out just eating smaller or larger amounts of food than usual, but at some point, the urge to eat less or more spirals out of control. Eating disorders are very complex, and despite scientific research to understand them, the biological, behavioral and social underpinnings of these illnesses remain elusive.

Eating disorders frequently appear during adolescence or young adulthood, but some reports indicate that they can develop during childhood or later in adulthood. Women and girls are much more likely than males to develop an eating disorder.

Men and boys account for an estimated 5 to 15 percent of patients with anorexia or bulimia and an estimated 35 percent of those with binge-eating disorder. Eating disorders are real, treatable medical illnesses with complex underlying psychological and biological causes. They frequently co-exist with other psychiatric disorders such as depression, substance abuse, or anxiety disorders. People with eating disorders also can suffer from numerous other physical health complications, such as heart conditions or kidney failure, which can lead to death.

Psychological and medicinal treatments are effective for many eating disorders. However, in more chronic cases, specific treatments have not yet been identified.

In these cases, treatment plans often are tailored to the patient’s individual needs that may include medical care and monitoring; medications; nutritional counseling; and individual, group and/or family psychotherapy. Some patients may also need to be hospitalized to treat malnutrition or to gain weight, or for other reasons.

Anorexia nervosa is characterized by emaciation, a relentless pursuit of thinness and unwillingness to maintain a normal or healthy weight, a distortion of body image and intense fear of gaining weight, a lack of menstruation among girls and women, and extremely disturbed eating behavior. Some people with anorexia lose weight by dieting and exercising excessively; others lose weight by self-induced vomiting, or misusing laxatives, diuretics or enemas.

Many people with anorexia see themselves as overweight, even when they are starved or are clearly malnourished. Eating, food and weight control become obsessions. A person with anorexia typically weighs herself or himself repeatedly, portions food carefully, and eats only very small quantities of only certain foods. Some who have anorexia recover with treatment after only one episode. Others get well but have relapses. Still others have a more chronic form of anorexia, in which their health deteriorates over many years as they battle the illness.

According to some studies, people with anorexia are up to ten times more likely to die as a result of their illness compared to those without the disorder. The most common complications that lead to death are cardiac arrest, and electrolyte and fluid imbalances. Suicide also can result.

Other symptoms may develop over time, including:

Some research suggests that the use of medications, such as antidepressants, antipsychotics or mood stabilizers, may be modestly effective in treating patients with anorexia by helping to resolve mood and anxiety symptoms that often co-exist with anorexia. Recent studies, however, have suggested that antidepressants may not be effective in preventing some patients with anorexia from relapsing. In addition, no medication has shown to be effective during the critical first phase of restoring a patient to healthy weight. Overall, it is unclear if and how medications can help patients conquer anorexia, but research is ongoing.

Different forms of psychotherapy, including individual, group and family-based, can help address the psychological reasons for the illness. Some studies suggest that family-based therapies in which parents assume responsibility for feeding their afflicted adolescent are the most effective in helping a person with anorexia gain weight and improve eating habits and moods.

Shown to be effective in case studies and clinical trials, this particular approach is discussed in some guidelines and studies for treating eating disorders in younger, nonchronic patients.

Others have noted that a combined approach of medical attention and supportive psychotherapy designed specifically for anorexia patients is more effective than just psychotherapy. But the effectiveness of a treatment depends on the person involved and his or her situation. Unfortunately, no specific psychotherapy appears to be consistently effective for treating adults with anorexia. However, research into novel treatment and prevention approaches is showing some promise. One study suggests that an online intervention program may prevent some at-risk women from developing an eating disorder.

Bulimia nervosa is characterized by recurrent and frequent episodes of eating unusually large amounts of food (e.g., binge-eating), and feeling a lack of control over the eating. This binge-eating is followed by a type of behavior that compensates for the binge, such as purging (e.g., vomiting, excessive use of laxatives or diuretics), fasting and/or excessive exercise.

Unlike anorexia, people with bulimia can fall within the normal range for their age and weight. But like people with anorexia, they often fear gaining weight, want desperately to lose weight, and are intensely unhappy with their body size and shape. Usually, bulimic behavior is done secretly, because it is often accompanied by feelings of disgust or shame. The binging and purging cycle usually repeats several times a week. Similar to anorexia, people with bulimia often have coexisting psychological illnesses, such as depression, anxiety and/or substance abuse problems. Many physical conditions result from the purging aspect of the illness, including electrolyte imbalances, gastrointestinal problems, and oral and tooth-related problems.

As with anorexia, TREATMENT FOR BULIMIA often involves a combination of options and depends on the needs of the individual.

To reduce or eliminate binge and purge behavior, a patient may undergo nutritional counseling and psychotherapy, especially cognitive behavioral therapy (CBT), or be prescribed medication. Some antidepressants, such as fluoxetine (Prozac), which is the only medication approved by the U.S. Food and Drug Administration for treating bulimia, may help patients who also have depression and/or anxiety. It also appears to help reduce binge-eating and purging behavior, reduces the chance of relapse, and improves eating attitudes.

CBT that has been tailored to treat bulimia also has shown to be effective in changing binging and purging behavior, and eating attitudes. Therapy may be individually oriented or group-based.

For more on these Eating Disorders, see: http://www.nimh.nih.gov/health/publications/eating-disorders/complete-index.shtml

For a Christian perspective: http://www.christiananswers.net/q-eden/eatingdisorders.html