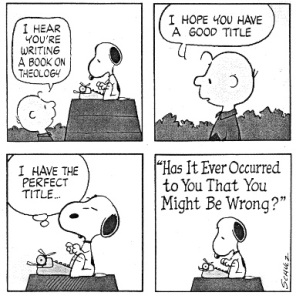 Grace, they say, is God’s Riches At Christ’s Expense. I don’t remember when I first heard that nifty mnemonic acrostic, but I know it’s just a hook to hang some teaching on, and it’s a fine, sturdy hook. But I have studied some more theology since then, and have learned that we can argue about anything, including definitions of grace. So here are some alternative acrostics; something for everybody.

Things have been going swimmingly well.  In the last week, I’ve somehow strung 5-6 good days together.  These are some of the first without depression/mania in several months!  I feel like I’m on solid ground finally.

I’ve forgotten how good it feels to be normal.  Today, I actually looked forward to face the day.  I have hope!  God’s Spirit is touching me and I sense the presence of Jesus.  I have pulled close to him.  I still have physical issues, but that doesn’t matter.  In Malachi 4:2, “And you will go free, leaping with joy like calves let out to pasture from the stall”.   That’s exactly how I feel right now.

I am cautious though.  This season may not last.  Durability of mood is not exactly part of the Bipolar Disorder package.  But, I won’t begrudge a little joy and peace making its way into my life.  Besides, as a Christian believer my hope is in a person–Jesus!

I am the King of Fluctuation.  Mr. Roller Coaster himself.  So bear with me, and pray for me.

It’s amusing to see how thing get started.  I’ve been hearing a lot about “zombies”.  It’s crazy, but zombies are now suddenly vogue, and I’m sure they appreciate the publicity, having stalked the landscape for so long without any recognition at all.

But seriously, this new social focal point nails down a real issue: Passivity.  I know its a leap, but it seems that that is a real issue in our society.  The dictionary defines the word for us, as “the trait of remaining inactive; a lack of initiative.”  We are often led to a place where we are to accept the status quo, and even see that as a healthy characteristic.

I see two areas of conflict we have with zombie-fication.  One is spiritual, the other mental.  Passivity in our Christian walk is quite dangerous.  We begin to interpret life as something that acts on us, rather than acting boldly and with assurance, we let everything just roll over us.  I’m thinking of Caleb, who in Scriptures is an old man (Joshua 14:11-12).  Yet he “demands” to be given the top of a mountain which is under the control of fierce giants.

Such an attitude is not normal.  I see Caleb as a florescent marker of the Spirit.  You look through  history and he sticks out, you can’t hide him.  He doesn’t blend in and he certainly doesn’t drift into the cold dark night quietly.  He shows up in Numbers 14:24, “But my servant Caleb, because he has a different spirit and has followed me fully, I will bring into the land into which he went, and his descendants shall possess it.”

Having a mood disorder like bipolar,  passivity is brought to you on a platter.  The meds are quite enough to mellow and control all your actions.  (I believe in meds, btw).  Spiritually, we suffer. It is hard for me to believe in God and worship Him if I have no initiative.  I personally find a ferocious battle with myself when ever I try to move closer.

I want to close this out.  I just want to point out this “zombie-ifcation syndrome” is real and that it often haunts us as mentally ill people.  As a fellow believer in Jesus Christ I must resist and stand for Him.  I need to be more aware of these issues, and not become part of the walking dead.  Whatever it takes, I want to be alive.   Being real, not sedated into a mindless stupor.

Combat veterans, sexual assault survivors, and other victims of trauma are vulnerable to a condition called Post-Traumatic Stress Disorder (PTSD). People with PTSD suffer from a range of symptoms that interfere with their capacities to enjoy normal life.

People who suffered suicidal conditions, particularly conditions that were chronic, recurrent, or included one or more attempts, may also be victims of PTSD. According to its definition, PTSD may result when a person suffers an event or situation that is outside the range of normal experience, exceeds the individual’s perceived ability to meet its demands, and poses a serious threat to the loss of life.

Suicidal people meet the formal criteria for PTSD. Severe and prolonged suicidal pain is not something that most people suffer. People in suicidal crises feel that they are at the breaking point of what they can cope with. Since 30,000 people die by suicide each year in the United States, it is a condition that posesses a serious threat to the loss of life.

Many of us are haunted by memories of acute crises, acts of self-injury, or extended periods of severe depression. Like citizens of a besieged city, we lived through periods of time in which we had a realistic and unrelenting fear that we would soon be dead. We suffer PTSD simply from having been suicidal, independently of whatever particular traumas may have contributed to our becoming suicidal, such as abuse during childhood or exposure to the violent death of someone else. Our “suicide PTSD” is also distinct from whatever traumatic events may happen as a result of being suicidal, such as involuntary hospitalization or job discrimination. Undoubtedly, most of us suffered many types of traumatic events in our lives, and these events and their consequences need to be addressed in recovery. But the suicidal crises themselves may be events that induce PTSD.

The PTSD literature for veterans and sex assault survivors lists conditions that are commonly found among survivors of those types of trauma. Survivors typically have only some of these symptoms, and the severity of a particular symptom may vary from individual to individual. Survivors of different types of traumatic events often have a different range of symptoms. A remarkably large number of these conditions are common among people with long-term histories of suicidal pain:

In a support group we have a chance to talk about our suicidal histories without the fear that we will be taken to a hospital for doing so. We can talk about the isolation, the fears, the pain, the confusion, the acts of self-injury, the behavior of others that was stigmatizing, denying, abusive, the horrible sense of estrangement that exists when you are in a terrible situation and there is no one who understands what you are going through, the hatred and contempt for oneself and the world, the debilitating sense of personal weakness. We see that we are not alone. We do not have the seriousness of our condition minimized, denied, or belittled. With time, the pain abates and the troublesome PTSD symptoms diminish.