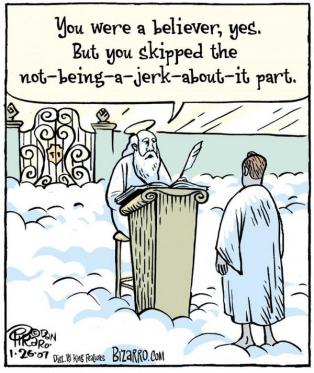 “Do not be excessively righteous and do not be overly wise. Why should you ruin yourself?”

I’m thinking out loud about something, so I should alert everyone.  Anyway, I’m thinking about “scruples”.  The dictionary defines scruples as “an uneasy feeling arising from conscience or principle that tends to hinder action.”

The malady developed in the middle ages.  Among the saints who were not yet labeled saints, there developed a particular syndrome of hypersensitivity toward sin and holiness.  You might say that they got stuck in the proverbial “hamster wheel” and couldn’t get off.  Run, run, run and they developed an irrational fear of somehow missing God.  Many a zealous saint has turned obsessive and superstitious. Suicide would happen.

Wikipedia says this about “scruples”– –“an obsessive concern with one’s own sins and compulsive performance of religious devotion.”   It is essentially the doubt and fear that you will do or say something that is not right.  It locks you up inside to the point you can’t do anything.  Scruples can be one of the occupational hazards of the devout believer.

Ecclesiastes postulates the idea of being overly devout.  “Do not be excessively righteous and do not be overly wise. Why should you ruin yourself?” (Eccl. 7:16) This verse, suggests that one can be excessive, or, too good.  That might rankle some, as it did me.  How can you be too righteous?

Luther once said, “Be a sinner and sin strongly, but more strongly have faith and rejoice in Christ.” That intrigues me. I once heard a sermon entitled, “Does Your Christianity Include You?” (I can remember the title, but not the message.)

I guess we sometimes develop a sense of wanting to please God to the extent of denying our humanity.

At least that’s where my own battles with scrupulosity originate.  I am thinking that “Pharaseeism” is kind of like its cousin; they are closely related. I think we start to have issues when we start to become obsessive about our holiness and our discipleship.  If a little is really good, then a lot is even better; this is our rationale, but it doesn’t work that way.

There are several examples in the Word.  I think of Jephthah and his over-the-top vow to the Lord.  In Judges 11, Jephthah vowed to God that if he were victorious in battle, he would give to God whoever came through the doors of his house upon his return from battle. In verse 34-35  we read that his only child a daughter came out first upon his return from battle. Jephthah was crushed.

This wasn’t necessary, or even required, but if we look at his life it seems that he had an impulse to overcompensate.  He was blown away by his daughter’s appearance when he returned home.  Saul was another, with Jonathan and the honey.  Just something to think about.

“If there be anything that can render the soul calm, dissipate its scruples and dispel its fears, sweeten its sufferings by the anointing of love, impart strength to all its actions, and spread abroad the joy of the Holy Spirit in its countenance and words, it is this simple and childlike repose in the arms of God. “

2 thoughts on “Are You Too Righteous?”