Q: Is it wrong to get angry at God?

I’ve beten through some very hard times recently and I feel like God has let me down. I’d like to get past this, I guess, but right now I can’t help feeling angry at God.

A: The real question is this: Will God get angry at you if you get angry at Him, and refuse to have anything more to do with you?

The answer is “No”! Even when we’re angry at Him, He still loves us and yearns for us to turn to Him for the comfort and encouragement we need. And that’s what I pray you will do. 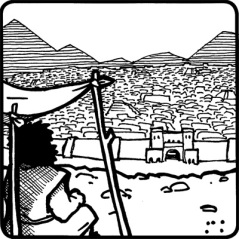 Do you remember the prophet Jonah in the Old Testament? Some have called him “the reluctant prophet,” because he tried to flee when God called him to preach to his enemies. Later (after God sent a large fish to stop his flight), he reluctantly obeyed God and preached to his enemies. To his surprise they repented and turned to God.

He should have rejoiced – but instead “Jonah was greatly displeased and became angry” (Jonah 4:1). Gently God explained to him that He loved even Jonah’s enemies – and so should Jonah. What is the point? Simply this: Jonah was angry at God – but God didn’t reject him. Instead, Jonah needed to learn to trust God, even if he didn’t like what was going on.

Perhaps this is one of the lessons God wants to teach you. Life doesn’t always go the way we want it to. But God still loves us; He loves us so much that He sent His only Son into the world to die for us. Put your life into Christ’s hands, and then ask God to help you begin to trust Him, no matter what happens to you.

Affectionately known as the “World’s Preacher” for more than 60 years, the Rev. Billy Graham is one of the most influential and respected spiritual leaders of the 20th century. He has been a friend and spiritual advisor to ten American presidents and has preached the Gospel to more people in live audiences than anyone else in history — nearly 215 million people in more than 185 countries and territories — through various meetings. Hundreds of millions more have been reached through television, video, film, and webcasts.

2 thoughts on “Is it Wrong to Get Angry with God?”