Buried in the Old Testament is the idea of the Cities of Refuge.

They speak profoundly to our situation and bring real hope for us who struggle so. Six places of safety were given to protect those who accidentally killed another person— maybe an ax-head flew and hit someone, and they died as a result.

God told Joshua to establish cities of protection where one could be safe from an avenger. There were six of them, three on the east side of the Jordan river, and three on the west. The cities were pretty much covering Israel; each was spread out intentionally so they were always close. That city became a place of asylum for those guilty of manslaughter.

Us as believers, we know that we’ve committed crimes against God and other people. The burden we carry threatens to undo us. Satan (and his minions) want to destroy us—and honestly, we deserve it. We are essential ‘criminals’ who have hurt others and damaged ourselves in the process.

Outside of the city, we’re vulnerable—but inside those walls we find safety.

Those who have killed others are protected. If we venture outside, we find our adversary who is waiting. Scripture tells us that we must stay cloistered there until the current high priest dies. Upon his death, we’re released and may leave the city walls.

The text speaks for itself, and there is spiritual logic in all of this. We see parallels here that speak to our condition. We’ve messed up big time. We also carry issues that the enemy can attack. Depression, bipolar, trauma, and even thoughts of committing suicide—they can be a real part of our lives.

I must tell you that safety is found in only a place.

Finding God and abiding in him is our place of safety. His walls protect us, Jesus is our high priest, who never dies; that means we need to stay with him, permanently. I like Hebrews 6:18, LB:

“Now all those who flee to him to save them can take new courage when they hear such assurances from God; now they can know without a doubt that he will give them the salvation he has promised them.”

For us especially, we often have problems with the doctrine of assurance of salvation. Our enemy works overtime to accuse us (Rev.12:10). We’re his targets and the lies of many demons assault us. We can, at times, wonder if we’re really saved. We wonder if we are really forgiven, and we doubt our salvation. Satan’s efforts can be constant and crippling.

“Whoever dwells in the shelter of the Most High
will rest in the shadow of the Almighty.
2 I will say of the Lord, “He is my refuge and my fortress,
my God, in whom I trust.”

This psalm focuses being intimate with our heavenly Father.

Throughout the entire chapter we see personal pronouns used. In contrast to other psalms that are directed to the nation, this one is written to an individual. This personal focus makes this a favorite psalm for many.

Shelter and shadow, refuge and fortress are the opening ‘word pictures’ used very elegantly. The psalmist writes what he knows, and it is apparent that he understand the needs of the human spirit, and for protection. Each of these four words creates a common link between believers. Each of us need a working understanding of all four protections.

Dwelling, resting and ‘saying’ are necessary elements for the word pictures to work. I should ‘dwell’ in God’s sheltered care. All too often, I wander out past the security of the Lord (or maybe I’m lured out?) But there is safety in having God so close to us. His proximity is for my protection.

“Surely he will save you
from the fowler’s snare
and from the deadly pestilence.
4 He will cover you with his feathers,
and under his wings you will find refuge;
his faithfulness will be your shield and rampart.”

V.v. 3-4, maintains its personal or familiar tone. ‘Save you’ (salvation) is far more that a theological term.  For the psalmist however, it’s not about ‘doctrine’; rather the psalm is an embrace. He is rescued from the trap, and the sickness that seems so contagious never touches him. Moving from metaphor to metaphor, he engages our imaginations to ‘see’ God’s salvation. The writer knows his stuff.

The Lord is pictured as a protective bird that covers his chicks.

We have a sure confidence as we gather together in that warm and safe spot under His wing. Whatever is after us has to go through God first. His presence is formidable. In His company is found our only safety.

“What, then, shall we say in response to these things? If God is for us, who can be against us? Who will bring any charge against those whom God has chosen? It is God who justifies.”

All of heaven is rallying for your well-being. You are sure of this based on your faith in God’s own word. He has ‘busted us’ out of a dark cage, and now defends you against all your enemies. And that is a very good thing.

“Surely He shall deliver you from the snare of the fowler, and from the perilous pestilence.”

“He shall cover you with His feathers,
And under His wings you shall take refuge;
His truth shall be your shield and buckler.”

“There is no neutral ground in the universe; every square inch, every split second, is claimed by God and counter-claimed by Satan.”

I believe that there is a great opposition to living free. Satan contests every square inch. His ‘modus operandi’ parallels the predator. He likes to hunt human beings. We see his power and influence all around us.

I’m being quite careful not to be melodramatic or manipulative when I say this, but Satan has a terrible plan for your life. He often uses human ‘lackies’ to carry out his wishes.They will use deception, lies and foolishness to snare people’s souls. They [he] will even resort to brute force. As a result, many believers are being persecuted for their faith.

14 “David now stayed in the strongholds of the wilderness and in the hill country of Ziph. Saul hunted him day after day, but God didn’t let Saul find him.”

5 “My future is in your hands.  Rescue me from those who hunt me down relentlessly.”

7 “We escaped like a bird from a hunter’s trap. The trap is broken, and we are free!”

And there is plenty more where this come from. And we haven’t even got to the New Testament yet, where there are substantial references to this kind of attack. The doctrine of Satan is developed further there. Perhaps it is because we encounter the person of Jesus Christ and the act of personal redemption He made for each of us. Through this we discover that we have an enemy that we were never really aware before. And guess what— he hates us!

4 “Satan, who is the god of this world, has blinded the minds of those who don’t believe. They are unable to see the glorious light of the Good News.”

12 “For we are not fighting against flesh-and-blood enemies, but against evil rulers and authorities of the unseen world, against mighty powers in this dark world, and against evil spirits in the heavenly places.”

Just as we have in Jesus a personal savior, we find we also have an anagonist and a sworn enemy that is set on going to war on us. We didn’t ask for it, and it would be really swell if he didn’t exist at all. But the evil around us has a source  and we dare not minimize it.

Our fealty to Jesus becomes critical at times like this. Spiritual warfare has an ebb and a flow to it, sometimes the battles can be intense, and at other times less so. But we cannot do nothing at all apart from the blood of Christ. We must defend ourselves, by calling out to God, or else we will become a casualty.

Probably the capstone is the following verse. This pretty much sums up this ‘act of resistance’ we are all called to do. I wanted to emphasize it because it is critical:

“Stay alert! Watch out for your great enemy, the devil. He prowls around like a roaring lion, looking for someone to devour.” 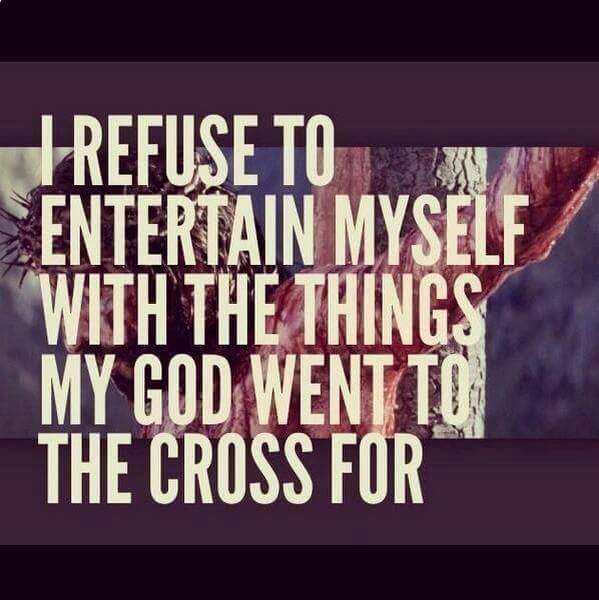 We must decide upon some things. This is not easy theology. It calls us to take decisive action.

The idea of Jesus dying on the cross for my sin is brutal. I’m left with the idea that I contributed to His death. But my sin had to be covered, and alas, and He did so. But I can never repay God for the drastic measures He took. But I do know that my life is now His. His for mine.

In many cultures it is a life for a life.

Some people groups believe that the person who saves another person is owed a “life debt” out of gratitude. I become His “property” because He died in my place. A life for a life. His for mine.

There are sins that I commit that He must pay for. This is not as easy as you might think; I confess my sin, and Jesus Christ picks it up. He has chosen to pay every and all penalties for it. I go “scot-free” while He must die. This is what He decided to do for me. A life for a life.

The cross was not just a Roman method of execution. It was planned in eternity for the rebellion of mankind. It was God’s “method.” He knew those “from the foundation of the world” but had to find a way to atone for their sin, and redeem them from Satan’s control. He must die for them. And it’s a life for a life. His for mine.

I’ve been ransomed and redeemed.

His death gives me eternal life– something which can ever be taken away. His own death makes me “holy.” The Bible promises me even more than this: forgiveness, peace, joy and “real” holiness. He has done everything, I have done nothing except believe.

His life for mine. A life for a life.

“Oh, the depth of the riches and wisdom and knowledge of God! How unsearchable are his judgments and how inscrutable his ways!”