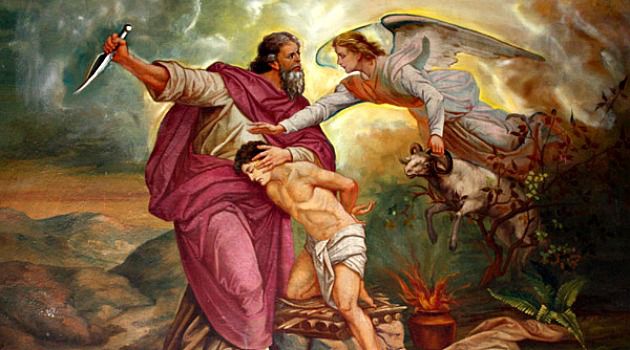 In the doctrine of biblical hermeneutics, the ‘Law of First Mention exists.’ Essentially it means that the first time a word or a concept is mentioned should go on to determine the way it needs to be understood throughout scripture. It is a guiding principle more than anything, but a good one at that. The Book of Genesis, being the first book, is a blessed repository for many of these ‘first mentions.’

In Genesis 22, we have the story of Abraham and Isaac on Mt. Moriah.

Abraham has tied up his son on an altar to offer him as a sacrifice in obedience to God’s direction (v. 2). This is faith being tested to the ultimate extreme. And Abraham shows us how to enter in.

“Then on the third day Abraham lifted his eyes and saw the place afar off. 5 And Abraham said to his young men, “Stay here with the donkey; the lad and I will go yonder and worship, and we will come back to you.”

This is the law of the first mention of the word “worship” in the Bible.

It sets the singular tone for all the scriptures on this subject. I guess what is interesting is there were no musical instruments involved. There was just these needful things:

When the Hebrew word for ‘worship’ was used for the first time; it is interlaced with the idea of an incredible sacrifice. Abraham is the first ‘worship leader’ and he has no guitar. No piano, or drums either. No musical instruments whatsoever. No overhead lyrics to speak of. Just a handmade altar, and a knife.

In the end, Abraham raises his knife, and then suddenly, to the relief of us all, he is stopped. His faith has withstood the test, and he has truly ‘worshipped.’

“But the Angel of the Lord called to him from heaven and said, “Abraham, Abraham!” So he said, “Here I am.” And He said, “Do not lay your hand on the lad, or do anything to him; for now I know that you fear God, since you have not withheld your son, your only son, from Me.”

Principle One: There really can’t be worship without sacrifice.

Recovering this truth concerning worship would be beneficial. It seems we delegate ‘worship’ to a select few who are talented and gifted. We probably don’t do this deliberately, but sometimes we feel it makes a better presentation. We all want to look good, even Christians. (Perhaps this is more substantial than we know.)

Principle Two: The first worshiper didn’t use a guitar, but a knife.

This difference keeps the idea of sacrifice in its definition. There isn’t worship without sacrifice. The knife thrust that he was ready to wield wasn’t backed up by drums or piano. Yet Abraham understood worship every step to Moriah with the knife in his belt.

“The Scriptures include or allude to just about every approach to worship there is: organized, spontaneous, public, private, simple, complex, ornate or plain. Yet there is no comment anywhere about any one way being preferred over another. Rather, it is the spiritual condition of the worshiper that determines whether or not God is at work.”

“So, brothers and sisters, because of God’s mercies, I encourage you to present your bodies as a living sacrifice that is holy and pleasing to God. This is your appropriate priestly service.”

Ultimately, we must realize our sacrifice is the Lamb of God. It’s His blood on God’s altar for our sins. As believers, our faith firmly rests in this spiritual fact. We of all people have cause to really worship.

“And going on from there he saw two other brothers, James the son of Zebedee and John his brother, in the boat with Zebedee their father, mending their nets, and he called them.”

“And immediately they left their nets and followed him.”

To mend nets was tedious but necessary. You would take your net and spread it on the ground in an open space. Every knot would be carefully examined. All holes would be repaired. Nothing was overlooked. Fishing nets were painstakingly maintained. Every day, without fail.

Fish would school, and if your gear was right, and you were in a prime place, you could catch a lot. But simultaneously, you could let hundreds of fish escape through a hole in your net. Each fish that escaped meant money lost.

Jesus walking along the beach surveyed the boats and crews. Since most of these guys had worked through the night, they were tired and maybe a bit “punchy.” Some had gotten somewhat lucky, while others had little to show for working so hard. Most likely the different crews teased each other as they unloaded.

Jesus walked through the bunches of fishermen. He looked at their hauls to see what they had caught. But it wasn’t the catch He was looking at, it was the men. It was from these laboring fishermen that He would choose. These men were rough-and-tumble rednecks. If they had chewing tobacco back then, they would use it.

He stands, looks, and then commands them.

Now if you are looking for disciples– future apostles and leaders, the seashore is not the best place to recruit. They really have a rudimentary education. No theology, and just a meager understanding of Jewish ritual and religion. Essentially there was no time for them to think outside their occupation. Sure there just might be one, or two that possessed more, but that would be the exception.

But Jesus had no desire to interview them, and take the best of the lot. He didn’t have a Human Resources Department, and there were no tests and no forms that had to list references. He simply commanded, and those who understood followed. Only after they left it all did He get their names and addresses. I think that it is the same today.

Will we leave our boat, with your nets? Really, you can keep mending or follow Him– it’s your choice. Most of the time though, decisions have a tendency to be irrevocable. Perhaps you have a moment, an instant of time to decide.

Sometimes mending nets can be back-breaking and tedious. But following the Lord Jesus is an unknown; too many choose to keep fixing. Others are launched into something new, and eternally significant.

The glaring truth is the necessity of obedience to Jesus’ command. There is no other voice we must hear. As a matter of fact, hearing (and really apprehending) is the only foundation we can trust to make our obedience true.

You can keep mending your nets and preparing for another night on the water. That is always your prerogative. But if you decide to follow you will need to leave what you know behind. That is authentic discipleship.

“Rest in this – it is His business to lead, command, impel, send, call or whatever you want to call it. It is your business to obey, follow, move, respond, or what have you.”

“And a woman in the town who was a sinner found out that Jesus was reclining at the table in the Pharisee’s house. She brought an alabaster jar of perfume.”

We should know that our simple and sincere words bless Jesus.

We are truly significant in that way.  Sometimes we have no idea the role we can play in His kingdom. What we’re doing when we offer up our true worship really does matter. The Kingdom comes when we really worship Him. Our sincere praise ushers in God’s rule in our hearts.

We touch Jesus, somehow, and in some way, we’ve blessed Him.

I believe that our sincere words encourage Him. He gladly receives this heartfelt offering of worship.  He often responds and blesses those who sing their genuine praise to Him.  Sometimes it’s hard to grasp that our worship really does matter to Jesus.

I have learned much from Him when I finally lay at His feet.  I really want to pour out every bit of perfumed nard,  and I sincerely desired to hold nothing back; to pour out the entire bottle.

We must make sure our worship stays extravagantly simple and centered on Jesus.

“By faith the walls of Jericho fell, after the people had marched around them for seven days.”

Cemented into our walk as believers is the powerful presence of Jesus Christ.  The scriptures, which are our supreme directive, show to us our spiritual imperative.  That mandate is victory, and we begin freedom with ourselves.  The Israelites have shown us a realistic understanding of overcoming by faith alone.

The stone walls of Jericho crumbled in when God’s covenant people believed the Word of the Lord for an astonishing victory.  Our Lord intends we walk around our obstacles by faith, our confidence is in His power to defeat all that resists Him. We can’t do this by copying their formula, but by having God’s presence.

Instead, our spiritual weapons are energized with divine power to effectively dismantle the defenses behind which people hide.5 We can demolish every deceptive fantasy that opposes God and break through every arrogant attitude that is raised up in defiance of the true knowledge of God. We capture, like prisoners of war, every thought and insist that it bow in obedience to the Anointed One.

Spiritual power is always present when Jesus is near.

When we’re united with him, we’ll see every obstacle fall prostate at His feet. In Christ, by faith, we can expect to see some pretty awesome things! We follow our High Priest as we face our own walls. We are no longer defenseless.

With you as my strength I can crush an enemy horde, advancing through every stronghold that stands in front of me.

For those of us who struggle with depression or other illness, we need a God of power who can work in our lives. There is a battle and victory will always contested. But for those of us who are downtrodden, we set our gaze on He who wants us free. Don’t give up. Follow the Lord Jesus to freedom.